continued from Landmark Update Review Build Mode I’ll preface this section by saying there are bugs. I won’t harp on them but will go over the general work flow. Starting […] 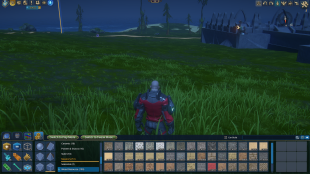 I’ll preface this section by saying there are bugs. I won’t harp on them but will go over the general work flow.

Starting out build mode on each log in at the Designs tab seems counter productive to the idea of Build Mode, it should start on the Build tab. There is also a delay on the Design tab due to loading them, I presume due to the images because it doesn’t happen on the Design Library (L) for me at all.

Building features seem mostly the same to me and I’m not super concerned with the hotkeys because those things are eventually learned. What I did find striking is that the way the keys are set up, it puts an inhibitor on rapid building. For example I can use tilde to switch between axis movement and rotation but have to move my left hand to the appropriate hotkeys to switch the axis of movement or rotation. So I have to not only have to remember more keys than we used to but also physically move farther to access those keys. This may not seem like a big deal but as players do more repetitive things like placing and adjusting props, this will become tedious.

I haven’t found a way to switch between build mode tabs quickly which also slows down production because moving the pointer from wherever it was to the tab and then on to the thing you want to do.

Overall I think the Build Mode should have the same hotkeys mostly but be contextual instead of a separate key for almost every single feature. That way it’s the same list of keys so the hand movements are physically similar regardless of what tab you’re in and it’s easier to try to find a key instinctively. I should clarify in the example I mentioned above, the difference in keys is that it’s one key to cycle through axis movement and a different key to cycle rotational axis and doing both repeatedly during placement is very awkward.

Finding keys in a hurry and not being able to will make the UI a hurdle instead of a tool leading to potential player confusion and possibly loss. 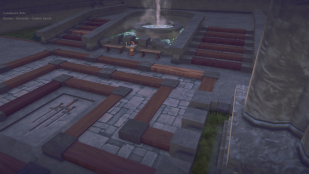 Not much has changed from previous iterations. The added teleport menu is a nice addition. Being able to teleport to guild members is new but should have been in from the start. The gallery still functions with tags and likes just as expected and there hasn’t been any changes to guild management.

The way we tag our Build Sites is probably the biggest change to how we interact with each other. The tagging system has been streamlined into a drop down system. While this will prevent some players from coming up with very specific tags for their Build Sites it will help bring focus to more Builds by ensuring more players are likely to see a build. A secondary benefit from this change is that the world will appear to have more Build Sites.

Overall I’m happy with this update. While it might be the buggiest update so far it also changes the core of the game. So much has come in that isn’t just a focus on builders. Even the NPC tools are a massive benefit to those that aren’t spending all their time building. I hope that the bugs get ironed out. I can’t wait to see where the efforts of the developers take us. This is the first hint of the game that Landmark can become.