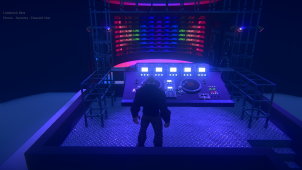 For those of you that don’t know, Landmark is a sandbox game experience that allows players to create experiences for other players. The normal term thrown about is ‘social building game’ but I don’t think that quite grasps the enormity of what Landmark truly is. The time Landmark has spent in closed beta showed that building is really just the beginning.

A typical first experience in Landmark starts by building something whether a castle or a house, possibly even a spaceship. The basic tool features are simple to grasp and allow for any player to start making stuff rather quickly. How much further you take your starting creation really depends on how much time you wish to invest. 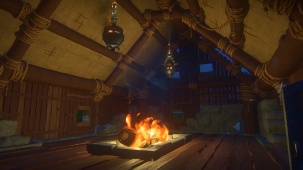 The only hurdle to creating something is gathering materials and even that isn’t too difficult. Spending a little time hunting,  harvesting or adventuring into Chaos Caverns will reward you with resources and new prop recipe drops. You can also get Lumens which allow you to purchase resources, recipes or props in case you decide you really want something in a hurry.

A basic building may be as far as some players may choose to go before deciding they want to be an Adventurer. For others there is a whole lot more to do besides just making houses. For starters you can use Linking & Triggering to bring your creation to life. Whether you want to do simple things like setting the lights and doors to interact or putting enemy NPC’s to fight, you can.

For the players that are creative and looking to create an Adventure of their own, that’s possible to. Add links to make enemies patrol and fight or guard a secret room. Create boss like scenarios to test the mettle of all the visitors to their Build Site. The size of the Adventure is limited only by the space allowed to build and what a player learns to execute. 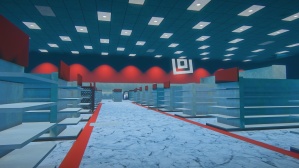 All the while this seems like it may be generic fantasy fare but we’ve already seen Build Sites that break the bounds and create content that was never expected out of Landmark. First there were mazes and jumping puzzles that have all evolved as new features were added. Then there were game shows such as Metallical’s Monster Build that allowed players to form a team and put their building skills to the test with viewer chosen design categories. Community driven group builds run by Colossus, Katarella and others as well as community run contests and various activities. Movies have been made using in-game resources that look phenomenal (See these examples by Jinkys [1], [2], [3]). Right now players are using Linking & Triggering to create systems to bring player interaction to a whole new level through games and events.

This may seem like I’ve yet to point out anything specific I like about Landmark but that’s actually my point. The sheer spectrum of choices available to a player in this sandbox is extraordinary. Unlike the games we’re used to there isn’t a list that says you must do this and you must do that, the list of things you can do is exactly what you want it to be. You can actually create instead of simply play. That any player can create so much means there is virtually no end to the amount of content you can experience.