Skip to content
Boldly go where no game has gone before.
Review

Boldly go where no game has gone before.

If you’re paying any attention to the video game world you’ll already know about No Man’s Sky (NMS). You know it’s been getting a lot of attention. You’ve probably heard […]

If you’re paying any attention to the video game world you’ll already know about No Man’s Sky (NMS). You know it’s been getting a lot of attention. You’ve probably heard it’s the biggest launch on Steam so far this year. I’m pretty sure that I don’t need to go into the very specifics of the game because if you’re here then you probably already know. The time I spend writing for you today will be just a little bit about where you can go in the game and more about where the game can go.

So far in NMS, you get a true open world experience where you go out and behave in pretty much any way you want. If you want to shoot other ships down, feel free to do it. If roaming and exploring is more your style, you can do that too. There is virtually no direction that you must go in this game. With a few base content rules and the general idea of “find the center of the universe” you are pushed out into the wide open and left to fend for yourself.

The vastness, the openness of the game is a double edge sword. One edge of that blade is finely tuned for those that make their own adventures and want to see things without their hands held. The opposite edge is that there is no narrative, no grand story that many have come to expect from modern games.

For the self sufficient crowd, NMS will offer many hours of game time. There is literally an entire universe to explore. Those players used to following in-game bread crumbs will have to look deeper to get much from NMS. That isn’t to say there isn’t a narrative to the game but it’s a universe size story where you have to fill in the blanks. You can find monuments and humanoids that will give you some insight to the history within the universe but you won’t experience the typical movie-like plots of one person versus another.

When one person asked me what I thought the gameplay was like I said “Star Trek in a River Raid format”. You’re not trying to beat any single bad guy, you basically set your own goals and keep playing as long as you feel like it.

While there is so much to explore in No Man’s Sky I can’t help but feel that there is so much more that can be added. Sure, NMS is a technical masterpiece and is the largest playing space in the history of video games but that doesn’t mean we can’t hope that more will be coming in the future.

One of the things that I felt was lacking was the depth of customization for your own ship. The mods are a nice feature but it would be fantastic to be able to rename it or at least give it a new paint scheme. A step beyond that would be a system to allow the external features of the ship to change based on the mod configuration or maybe through some cosmetic reconstruction of the parts.

The Sentinel system is interesting as a universal agent but I would love to see them expanded not just in difficulty but to become a more significant player amongst the stars. Define their motives more and find a way to leak their history into the narrative more than just through monuments. The humanoid NPC’s must’ve had some kind of experiences with them too so why not include that into the text? Why are all of the abandoned compounds overtaken by oozing entities, couldn’t the Sentinel’s overrun a few of them for some reason?

I know this will be a sore spot for some but the game really needs a multiplayer component. Yes, the space is vast and it’s going to be difficult and even unlikely that you find your specific friends. That said, having to fight real pilots would make for an entirely seperate and consequential experience. If you’re afraid of griefing then use the Sentinels in space to act as a deterrent, after all why couldn’t a machine survive in space? With real players, trading would be better and really change the shape of the game. Having some way to team up would also create a means to introduce stronger forces to fight and give some players another direction to go, like try to take a hold of a completely hostile solar system.

Scanning. This isn’t so much an idea of what to add or change but something that absolutely needs to be added. As players we need a way to know where we’ve been and better ways to navigate around. We’re flying freakin’ spaceships, how is it even possible that we can’t make a planetary map? We have access to a map of the universe but we can’t efficiently track and navigate to places we’ve already discovered? This is doubly odd when we are told each visit to the Anomaly’s that we are uploading our discovery data. Why can’t we access the data we clearly have? I’m not looking for some mini-map overlay, make it activate on the dash of our ships, zoom in on it and take up the whole screen. It can be wireframe with icons of the places we’ve discovered and activated (not just flown over). Having better navigation would allow players to create their own ecosystem in the game which would create more immersion.

The thing about No Man’s Sky is that it doesn’t seem like the kind of game where a sequel makes sense, which sounds insane especially with how much money it made already. Just think about it though, there aren’t really going to be multiple universes. Wouldn’t players just be mad that they already paid for a whole universe to explore? I think this is where DLC is the best route to go. No, not the usual Call of Duty small potatoes DLC but actual content to be added with decent changes to systems. Ramp up the mod system with all new mods and more than 3 versions, allow for more slots, bigger ships. Use the DLC for things that matter. Maybe we can start building ships or rare components to trade (and I mean extremely rare). Let us build space stations for ourselves that we can design how we want and not just duplicates of the ones in game already. Even building exploratory stations on the surface of planets would be a nice way to spend resources.

No Man’s Sky is one of those games that comes out of nowhere and just changes how you think about video games. I think we will be spending plenty of time thinking about what it does right and what could have been different but regardless it’s hard to ignore the scope of this. It feels like we’re standing on the shore with a friend who is looking out over the water, asking you ‘what do you think is over there’ and you look up to the stars and say ‘I have no clue but I want to find out’.

“Don’t be shocked when you realize you just spent 8 hours playing.” 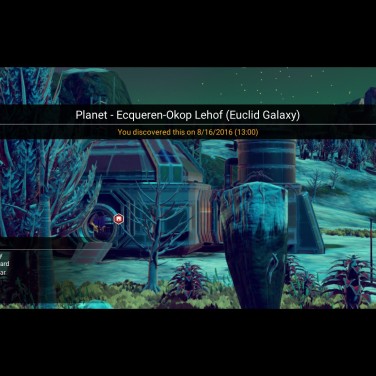