I should start this off by saying that I’m not one of those people that thinks the original Ghostbusters was some kind of iconic part of film. By the time I had seen the original, it had been on TV for years and didn’t really hold my attention. It took multiple viewings before I was able to say I’ve seen the whole thing and even now I can’t say I remember much about the movie. That said, based on the overwhelming negativity and poor ratings for this reboot, I skipped watching this in the theater and was cautious about buying the home release. 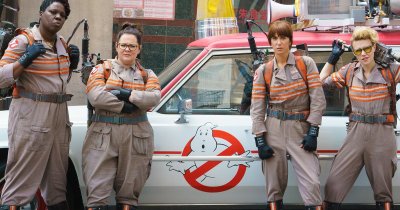 Going in I was expecting to be bored and feeling empty while viewing Ghostbusters (IMDB). I watched this a couple days after Central Intelligence (CI) and have to say I laughed and was more entertained watching Ghostbusters than that. While watching CI I was texting a friend that I thought it felt like a Melissa McCarthy movie, you know with safe humor, kind of tame and lacking a lot of those big laugh moments. At the time I thought it was funny because she ended up being in Central Intelligence so it was like hitting a bullseye.

I was wrong about Ghostbusters though. While there was a steady current of safe jokes, Ghostbusters offered up a surprising amount of big laughs. The way all four of the lead actors played off of each other kept me interested in the story even though it wasn’t all that deep of a plot. In particular I was very happy with how Kate McKinnon portrayed Holtzmann from start to finish.

Even more than that I was surprised at how much subtle humor was there below the surface, some of which I didn’t even notice until the second viewing. One example is during the opening scene where the tour guide is rattling off facts about the former owner of the estate, if you’re not paying attention you will miss his lighthearted delivery of quite a few horrible things. 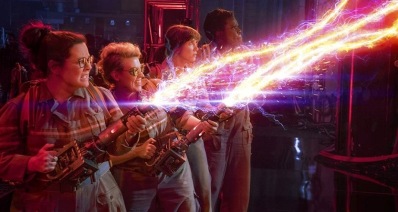 Ghostbusters could easily stand on it’s own but as with any reboot they like to shove in a bunch of callbacks to the original. In this case, most of it was pointless and/or gratuitous. Bill Murray’s part had some potential to contribute to the story but instead was literally thrown out the window before anything came of it. Annie Potts had a decent part and Ernie Hudson probably had the best cameo in the whole movie. The Stay Puft Marshmallow Man seemed like it was shoehorned in. Slimer should’ve gotten better treatment but at least he had a part to play in the overall plot of the movie. Dan Aykroyd and Sigourney Weaver had really small parts that come across like they were just there to make fans of the original notice them.

The problem with trying to put in almost every living actor from the originals the way they did is that it doesn’t further the plot. This reminds me of the way we see Stan Lee in almost every Marvel movie, mostly in there just because. In an era where we have directors cutting good scenes to make their run time shorter we still get these completely pointless bits that do nothing but run up the frame count. Maybe it’s my disconnect from the originals that biases me but I think they could’ve spent that screen time adding more to the plot.

I can’t say that Ghostbusters: Answer the Call is a cinematic masterpiece but I will say it’s more than entertaining. I’m sure there will be kids that watch this and grab onto it just like people did with the original. It’s safe to say that we will be seeing people of all ages continue to dress as Ghostbusters for many more years to come.

Has flaws but it’s far better than you have been told.